English author, illustrator, natural scientist and conservationist Beatrix Potter sadly passed away 22 December 1943. Born 28th July 1866. she is est known for her imaginative children’s books featuring animals such as those in The Tale of Peter Rabbit which celebrated the British landscape and country life, she was born into a privileged Unitarian family, and along with her younger brother, Walter Bertram, grew up with few  friends outside her large extended family. Her parents were artistic, interested in nature and enjoyed the countryside. As children, Beatrix and Bertram had numerous small animals as pets which they observed closely and drew endlessly. Summer holidays were spent in Scotland and in the English Lake District where Beatrix developed a love of the natural world which was the subject of her painting from an early age.She was educated by private governesses until she was eighteen. Her study of languages, literature, science and history was broad and she was an eager student. Her artistic talents were recognized early. Although she was provided with private art lessons, Potter preferred to develop her own style, particularly favouring watercolour. Along with her drawings of her animals, real and imagined, she illustrate.d insects, fossils, archeological artefacts, and fungi. In the 1890s her mycological illustrations and research on the reproduction of fungi spores generated interest from the scientific establishment.

The Tale of Mister Tod http://m.youtube.com/watch?v=RSHGpAlCt00

Following some success illustrating cards and booklets, Potter wrote and illustrated The Tale of Peter Rabbit publishing it first privately in 1901, and a year later as a small, three-colour illustrated book with Frederick Warne & Co. Potter went on to write many other books during this period (such as The Tale of Ginger and Pickles, about the local shop in Near Sawrey and The Tale of Mrs. Tittlemouse, a wood mouse) which reflect her increasing participation in village life and her delight in country living. Potter continued to write, illustrate and design spin-off merchandise based on her children’s books for Warne and published over twenty-three books; the best known are those written between 1902 and 1922.With the proceeds from the books and a legacy from an aunt, Potter bought Hill Top Farm Near Sawrey, a tiny village in the English Lake District near Ambleside in 1905.  Over the next several decades, she purchased additional farms to preserve the unique hill country landscape. Realising she needed to protect her boundaries she sought advice from W.H. Heelis & Son, a respected firm of solicitors with offices in nearby Hawkshead. With William Heelis acting for her she bought contiguous pasture and By the summer of 1912 Heelis had proposed marriage and Beatrix had accepted and The couple moved immediately to Castle Cottage, the renovated farm house on Castle Farm. Hill Top remained a working farm but was now remodelled to allow for the tenant family and Potter’s private studio and work shop.

At last her own woman, Potter settled into the partnerships that shaped the rest of her life: her country solicitor husband and his large family, her farms, the Sawrey community and the predictable rounds of country life. The Tale of Jemima Puddle-Duck and The Tale of Tom Kitten are representative of Hill Top Farm and of her farming life, and reflect her happiness with her country life. Potter also became a prize-winning breeder of Herdwick sheep and a prosperous farmer keenly interested in land preservation. She also established a Nursing Trust for local villages, and served on various committees and councils responsible for footpaths and other country life issues, Potter had been a disciple of the land conservation and preservation ideals of her long-time friend and mentor, Canon Hardwicke Rawnsley, the first secretary and founding member of the National Trust for Places of Historic Interest or Natural Beauty. She supported the efforts of the National Trust to preserve not just the places of extraordinary beauty, but those heads of valley and low grazing lands that would be irreparably ruined by development. She was also an authority on the traditional Lakeland crafts, period furniture and stonework and restored and preserved the farms that she bought or managed, making sure that each farm house had in it a piece of antique Lakeland furniture. Potter was interested in preserving not only the Herdwick sheep, but the way of life of fell farming.

In 1930 the Heelises became partners with the National Trust in buying and managing the fell farms included in the large Monk Coniston Estate. The estate was composed of many farms spread over a wide area of western Lancashire, including the famously beautiful Tarn Hows. Potter became the de facto estate manager for the Trust for seven years until the National Trust could afford to buy most of the property back from her.Her stewardship of these farms earned her wide regard, but she was not without her critics. She was notable in observing the problems of afforestation, preserving the intake grazing lands, and husbanding the quarries and timber on these farms. All her farms were stocked with Herdwick sheep and frequently with Galloway cattle.sadly Beatrix Potter passed away on 22 December 1943 at Castle Cottage. Near Sawrey at age 77, leaving almost all her property to the National Trust including over 4,000 acres (16 km2) of land, sixteen farms, cottages and herds of cattle and Herdwick sheep. She is credited with preserving much of the land that now comprises the Lake District National Park. Potter left almost all the original illustrations for her books to the National Trust. The copyright to her stories and merchandise was given to her publisher Frederick Warne & Co, now a division of the Penguin Group. Hill Top Farm was opened to the public by the National Trust in 1946 her artwork was displayed there until 1985 when it was moved to William Heelis’s former law offices in Hawkshead, also owned by the National Trust as the Beatrix Potter Gallery.Potter gave her folios of mycological drawings to the Armitt Library and Museum in Ambleside before her death. The Tale of Peter Rabbit is owned by Frederick Warne and Company, The Tailor of Gloucester by the Tate Gallery and The Tale of the Flopsy Bunnies by the British Museum. The largest public collection of her letters and drawings is the Leslie Linder Bequest and Leslie Linder Collection at the Victoria and Albert Museum in London. In the United States, the largest public collections are those in the Special Collections of the Free Library of Philadelphia, and the Lloyd Cotsen Children’s Library at Princeton University. To this day Potter’s books continue to sell throughout the world, in multiple languages, and Her stories have been retold in song, film, ballet and animation. 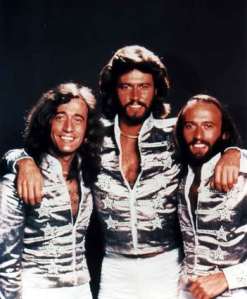 Best remembered as being two members of the phenomenally successful Bee Gees, The late great Maurice and Robin Gibb were both born 22nd December 1949. The three Gibb brothers, Barry Robin and Maurice,  made their earliest performances at local movie theatres in Manchester in 1955, singing between shows. Robin Gibb and his brothers seemed to have a natural talent that allowed them to write hit songs with ease. In the 1950′s the Gibb  brothers emigrated to Australia with their parents.In the mid-1960′s  the Gibb brothers returned to England to further their singing careers. Their early recordings, including dramatic hits such as Massachusetts (1967), drew comparisons with the Beatles. The trio reached the Top Ten with I’ve Gotta Get a Message to You and I Started a Joke (both 1968) but split briefly after the relative failure of their concept album Odessa (1969), but reunited in 1970 and had hits with Lonely Days (1970) and How Can You Mend a Broken Heart (1971). They returned to the charts with Main Course in 1975 – in which they produced a new sound – the emphasis being on dance rhythms, high harmonies, and a funk beat,  and their trademark falsetto harmonies propelled the Bee Gees right to the forefront of the disco movement and turned it into a global phenomenon,   with hits including Stayin’ Alive  Jive Talkin’,  You Should Be Dancing and Night Fever, which featured on the soundtrack of the 1977 film Saturday Night Fever, starring John Travolta

Their success was not limited to recordings issued under their own name either. Individually and together they’ve also written and produced major hits for artists including Barbra Streisand, Diana Ross, Dolly Parton and Kenny Rogers, as well as Frankie Valli. During a lengthy career, they have  sold more than 200 million records and become the first and only songwriters to place five songs in the Top Ten at the same time.  In 1997 the band was also inducted into the Rock and Roll Hall of Fame and are  among the most successful vocal groups in rock and roll history, Sadly though both Maurice and Robin Gibb have passed away, but they have left the world some fantastic music.

THE BEST OF THE BEE GEES http://m.youtube.com/watch?v=TnQuYv5gY-g

British musician Joe Strummer a.k.a John Graham Mellor sadly passed away 22 December 2002. born 21 August 1952,  he is best remembered as the co-founder, lyricist, rhythm guitarist and lead vocalist of the British punk rock band The Clash, from London, a band that formed in 1976 as part of the original wave of British punk. Along with punk, their music incorporated elements of reggae, ska, dub, funk, rap, and rockabilly. The Clash were one of the most prominent of the emerging bands in the UK punk rock scene, their second album, Give ‘Em Enough Rope (1978) reaching number 2 on the UK charts. Soon after, they began achieving success in the US, starting with London Calling (1979), and peaking with 1982′s Combat Rock, reaching number 7 on the US charts and being certified 2x platinum there. The Clash’s politicised lyrics, musical experimentation, and rebellious attitude had a far-reaching influence on rock, alternative rock in particular.[1]His musical experience included his membership of The 101ers, Latino Rockabilly War, The Mescaleros and The Pogues, in addition to his own solo music career. Strummer’s work as a musician allowed him to explore other interests, which included acting, creating film scores for television and movies, songwriting, radio broadcasting, and a position as a radio host. Strummer is one of the iconic figures of the British punk movement.Strummer and The Clash were inducted into the Rock and Roll Hall of Fame in January 2003. Strummer sadly passed away 22 December 2002 however ,in his remembrance, Strummer’s friends and family have established theStrummerville Foundation for the promotion of new music, and each year there are many festivals and both organised and spontaneous ceremonies worldwide to celebrate his memory