Thanks to the Telegraph and WHSmith Ihave managed to acquire some great books recently and being as I don’t get out as much due to fragile health, I have been reading a lot more. Anyway this weekThe Telegraph newspaper in association WHSmith is offering the novel One Night in Winter by Simon Sebag Montefiore, for £2.99 instead of £7.99. Which has recently been released in paperback. It has been described as another powerful story of secrets and family From the best-selling author of Jerusalem and is available from Thursday, March 13, 2014 and Wednesday, March 19, 2014, or by presenting one of the printed vouchers published in the paper on Thursday, March 13, or Saturday, March 15.

The novel takes place in Moscow 1945. As Stalin and his courtiers celebrate victory over Hitler, shots ring out. On a nearby bridge, a teenage boy and girl lie dead. But this is no ordinary tragedy and these are no ordinary teenagers, but the children of Russia’s most important leaders who attend the most exclusive school in Moscow. Is it murder? A suicide pact? Or a conspiracy against the state? Directed by Stalin himself, an investigation begins as children are arrested and forced to testify against their friends – and their parents. This terrifying witch-hunt soon unveils illicit love affairs and family secrets in a hidden world where the smallest mistakes is punishable by death.

Like Loading...
March 12th is World Day Against Cyber-Censorship, which aims to rally users in fighting repression of online speech. Reporters Without Borders also created this day to celebrate the work of brave individuals who have promoted free expression on the Internet. The annual Netizen Prize is awarded to bloggers, online journalists, and cyber-dissidents, who have demonstrated exceptional dedication to this cause. It was first observed on March 12, 2008 at the request of Reporters Without Borders and Amnesty International. A letter written by Jean-Francois Julliard, Secretary-General of Reporters Without Borders, and Larry Cox, Executive Director of Amnesty International, was sent to the Chief Executive Officers of Google, Yahoo! & Microsoft Corporation to request observation of the day.
The Electronic Frontier Foundation remains dedicated to reporting cases of online censorship from all regions of the world, and to emphasize the importance of online anonymity in preserving individuals’ right to free speech. On our ongoing feature, This Week in Censorship, we cover global stories of imprisoned bloggers, filtered content, blocked websites, and instances of Internet disconnection.

A broad array of reasons are offered as justification for censorship. Bloggers in Thailand face imprisonment for criticizing the monarch. In Pakistan, the Telecommunications Authority has blocked websites, banned words from SMS texts, and most recently, has released a request for proposals to build a national blocking and filtering system: All in the name of fighting “obscene content.” The Turkish government has implemented a so-called “democratic” opt-in filtering mechanism for content that is deemed unsuitable for children and families.

Another common trend is censorship enabled in the name of battling copyright violations. Through our Global Chokepoints project, we are monitoring instances of pro-copyright laws that justify filtering of content, websites blockages, or Internet disconnection to fight infringement. Censorship remains rampant in the Middle Eastern region. In Syria, Iran, and elsewhere, bloggers continue to face imprisonment, and common users have limited access to content online due to state-mandated blocking and filtering programs. Another ongoing issue being covered are authoritarian states using Western-based surveillance technologies to monitor and spy on their citizens. State authorities can use the collected data to arrest, harass, or torture individuals accused of participating in political dissent. 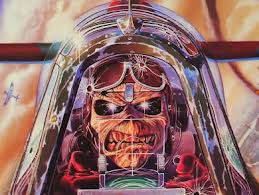 Steve Harris, from Awesomely noisy Heavy Metal band Iron Maiden was born 12th March 1956. Iron Maiden hail from Leyton in east London and were formed in 1975 by bassist and primary songwriter, Steve Harris. Since their inception, the band’s discography has grown to include a total of thirty-six albums: fifteen studio albums; ten live albums; four EPs; and seven compilations.

Pioneers of the New Wave of British Heavy Metal, Iron Maiden achieved success during the early 1980s. After several line-up changes, the band went on to release a series of U.S. and UK platinum and gold albums, including 1982′s The Number of the Beast, 1983′s Piece of Mind, 1984′s Powerslave, 1985′s live release Live After Death, 1986′s Somewhere in Time and 1988′s Seventh Son of a Seventh Son. Since the return of lead vocalist Bruce Dickinson and guitarist Adrian Smith in 1999, the band have undergone a resurgence in popularity, with their latest studio offering, The Final Frontier, peaking at No. 1 in 28 different countries and receiving widespread critical acclaim.

Considered one of the most successful heavy metal bands in history, Iron Maiden have sold over 85 million records worldwide with little radio or television support. The band won the Ivor Novello Award for international achievement in 2002, and were also inducted into the Hollywood Rock Walk in Sunset Boulevard, Los Angeles, California during their United States tour in 2005. As of August 2011, the band have played almost 2000 live shows throughout their career. For the past 30 years, the band have been supported by their famous mascot, “Eddie”, who has appeared on almost all of their album and single covers, as well as in their live shows.

Graham Coxon the Guitarist/ Singer with Blur was born 12th March 1969. Blur were formed in London in 1988 as Seymour, the group consists of singer/keyboardist Damon Albarn, guitarist/singer Graham Coxon, bassist Alex James and drummer Dave Rowntree. Blur’s debut album Leisure (1991) incorporated the sounds of Madchester and shoegazing. Following a stylistic change influenced by English guitar pop groups such as The Kinks, The Beatles and XTC, Blur released Modern Life Is Rubbish (1993),Parklife   (1994) and The Great Escape (1995). As a result, the band helped to popularise the Britpop genre and achieved mass popularity in the UK, aided by a chart battle with rival band Oasis in 1995 dubbed “The Battle of Britpop”.

In recording their follow-up, Blur (1997), the band underwent another reinvention, showing influence from the lo-fi style of American indie rock groups. “Song 2″, one of the album’s singles, brought Blur mainstream success in the United States. Their next album, 13 (1999) saw the band members experimenting with electronic and gospel music, and featured more personal lyrics from Albarn. In May 2002, Coxon left Blur during the recording of their seventh album Think Tank (2003). Containing electronic sounds and more minimal guitar work, the album was marked by Albarn’s growing interest in hip hop and African music. After a 2003 tour without Coxon, Blur did no studio work or touring as a band, as members engaged in other projects. In 2008 Blur reunited, with Coxon back in the fold, for a series of concerts and have continued to release several singles and retrospective releases. In 2012, Blur received a Brit Award for Outstanding Contribution to Music (And poor Adele Adkins got cut off in her prime).