Considered perhaps the 20th century’s best chronicler of English culture, the English novelist and journalist George Orwell, (Eric Arthur Blair).was Born on 25 June 1903, in Motihari, Bihar, in India, His work is marked by clarity, intelligence and wit, awareness of social injustice, opposition to totalitarianism, and belief in democratic socialism. Although Orwell wrote literary criticism, poetry, fiction and polemical journalism. He is best known for the dystopian novel Nineteen Eighty-Four (1949) and the allegorical novella Animal Farm (1945), which together have sold more copies than any two books by any other 20th-century author. His book Homage to Catalonia (1938), an account of his experiences in the Spanish Civil War, is widely acclaimed, as are his numerous essays on politics, literature, language and culture. In 2008, The Times ranked him second on a list of “The 50 greatest British writers since 1945″. Orwell’s work continues to influence popular and political culture, and the term Orwellian — descriptive of totalitarian or authoritarian social practices — has entered the vernacular with several of his neologisms, such as doublethink, thoughtcrime, Big Brother and thought police. 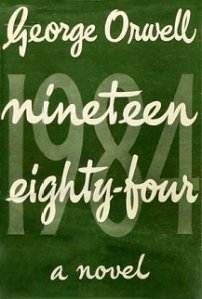 Nineteen Eighty-Four was published in 1949. It is a dystopian and satirical novel set in Oceania, where society is tyrannized by The Party and its totalitarian ideology.The Oceanian province of Airstrip One is a world of perpetual war, omnipresent government surveillance, and public mind control, dictated by a political system euphemistically named English Socialism (Ingsoc) under the control of a privileged Inner Party elite that persecutes all individualism and independent thinking as thoughtcrimes. Their tyranny is headed by Big Brother, the quasi-divine Party leader who enjoys an intense cult of personality, but who may not even exist. Big Brother and the Party justify their rule in the name of a supposed greater good.The protagonist of the novel, Winston Smith, is a member of the Outer Party who works for the Ministry of Truth (Minitrue), which is responsible for propaganda and historical revisionism. His job is to re-write past newspaper articles so that the historical record always supports the current party line. Smith is a diligent and skillful worker, but he secretly hates the Party and dreams of rebellion against Big Brother.As literary political fiction and as dystopian science-fiction, Nineteen Eighty-Four is a classic novel in content, plot, and style. Many of its terms and concepts, such as Big Brother, doublethink, thoughtcrime, Newspeak, and memory hole, have entered everyday use since its publication in 1949. Moreover, Nineteen Eighty-Four popularised the adjective Orwellian, which describes official deception, secret surveillance, and manipulation of the past by a totalitarian or authoritarian state. In 2005 the novel was chosen by TIME magazine as one of the 100 best English-language novels from 1923 to 2005. It was awarded a place on both lists of Modern Library 100 Best Novels, reaching number 13 on the editor’s list, and 6 on the reader’s list. In 2003, the novel was listed at number 8 on the BBC’s survey The Big Read.

Animal Farm is an allegorical novella which was published in England on 17 August 1945. According to Orwell the book reflects events leading up to the Russian Revolution of 1917, and then on into the Stalin era in the Soviet Union. Orwell, a democratic socialist, was a critic of Joseph Stalin and hostile to Moscow-directed Stalinism, especially after his experiences with the NKVD and the Spanish Civil War. The Soviet Union he believed, had become a brutal dictatorship, built upon a cult of personality and enforced by a reign of terror. In a letter to Yvonne Davet, Orwell described Animal Farm as his novel “contre Stalin” and in his essay of 1946, Why I Write, he wrote that Animal Farm was the first book in which he had tried, with full consciousness of what he was doing, “to fuse political purpose and artistic purpose into one whole”.The original title was Animal Farm: A Fairy Story, but the subtitle was dropped by U.S. publishers for its 1946 publication and subsequently all but one of the translations during Orwell’s lifetime omitted the addition. Other variations in the title include: A Satire and A Contemporary Satire. Orwell suggested the title Union des républiques socialistes animales for the French translation, which recalled the French name of the Soviet Union, Union des républiques socialistes soviétiques, and which abbreviates to URSA, the Latin for “bear”, a symbol of Russia.

It was written at a time (November 1943-February 1944) when the wartime alliance with the Soviet Union was at its height and Stalin was held in highest esteem in Britain both among the people and intelligentsia, a fact that Orwell hated. It was initially rejected by a number of British and American publishers, including one of Orwell’s own, Victor Gollancz. Its publication was thus delayed, though it became a great commercial success when it did finally appear—in part because the Cold War so quickly followed WW2. Time magazine chose the book as one of the 100 best English-language novels (1923 to 2005); it also places at number 31 on the Modern Library List of Best 20th-Century Novels. It won a Retrospective Hugo Award in 1996 and is also included in the Great Books of the Western World. The novel addresses not only the corruption of the revolution by its leaders but also how wickedness, indifference, ignorance, greed and myopia corrupt the revolution. It portrays corrupt leadership as the flaw in revolution, rather than the act of revolution itself. It also shows how potential ignorance and indifference to problems within a revolution could allow horrors to happen if a smooth transition to a people’s government is not achieved. Orwell sadly passed away on 21 January 1950 although his novels have remained popular and have also been adapted numerous times for film, television and Radio.