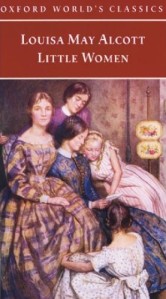 American novelist Louisa May Alcott was born November 29, 1832.She is best known as the author of the novel Little Women and its sequels Little Men and Jo’s Boys.Raised by her transcendentalist parents, Abigail May Alcott and Amos Bronson Alcott in New England she grew up among many of the well-known intellectuals of the day such as Ralph Waldo Emerson, Nathaniel Hawthorne, and Henry David Thoreau. Nevertheless, her family suffered severe financial difficulties and Alcott worked to help support the family from an early age. She began to receive critical success for her writing in the 1860′s. Early in her career, she sometimes used the pen name A. M. Barnard.Published in 1868, Little Women is set in the Alcott family home, Orchard House, in Concord, Massachusetts and is loosely based on Alcott’s childhood experiences with her three sisters. The novel was very well received and is still a popular children’s novel today. Alcott was an abolitionist and a feminist.The novel follows the lives of four sisters – Meg, Jo, Beth, and Amy March – and is loosely based on the author’s childhood experiences with her three sisters.

The first volume, Little Women, was an immediate commercial and critical success, prompting the composition of the book’s second volume, entitled Good Wives, which was also successful. Both books were first published as a single volume entitled Little Women in 1880. Alcott followed Little Women with two sequels, also featuring the March sisters: Little Men and Jo’s Boys. Little Women was a fiction novel for girls that veered from the normal writings for children, especially girls, at the time. Little Women has three major themes:”domesticity, work, and true love. All of them are interdependent and each is necessary to the achievement of a heroine’s individual identity.”Little Women itself “has been read as a romance or as a quest, or both. It has been read as a family drama that validates virtue over wealth.” Little Women has been read “as a means of escaping that life by women who knew its gender constraints only too well.” Alcott “combines many conventions of the sentimental novel with crucial ingredients of Romantic children’s fiction, creating a new form of which Little Women is a unique model.” within Little Women can be found the first vision of the “American Girl” and that her multiple aspects are embodied in the differing March sisters.

Alcott “made women’s rights integral to her stories, and above all to Little Women.”Alcott’s fiction became her “most important feminist contribution”—even considering all the effort Alcott made to help facilitate women’s rights.” Alcott thought that “a democratic household could evolve into a feminist society.” In Little Women, she imagined that just such an evolution might begin with Plumfield, a nineteenth century feminist utopia.”Little Women has a timeless resonance which reflects Alcott’s grasp of her historical framework in the 1860s. The novel’s ideas do not intrude themselves upon the reader because the author is wholly in control of the implications of her imaginative structure. Sexual equality is the salvation of marriage and the family; democratic relationships make happy endings. This is the unifying imaginative frame. Never married, Alcott continued to write until her death, but suffered chronic health problems in her later years, including vertigo. She attributed her illness and death to mercury poisoning. During her American Civil War service, Alcott contracted typhoid fever and was treated with a compound containing mercury.Recent analysis of Alcott’s illness, however, suggests that her chronic health problems may have been associated with an autoimmune disease, not acute mercury exposure. Moreover, a late portrait of Alcott shows rashes on her cheeks, which is a characteristic of lupus. Alcott died at age 55 of a stroke in Boston, on March 6, 1888, two days after her father’s death.She is buried in Sleepy Hollow Cemetery, Concord, Massachusetts