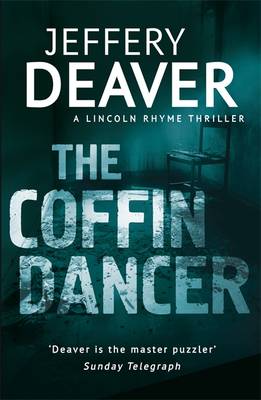 I would also like to read Coffin Dancer, the latest exciting psychological thriller by by Jeffrey Deaver and follow up to The Bone Collector. It features America’s most wanted hit man, Coffin Dancer, who has been hired by the Shady Co-Owner of Hudson Airlines to take care of three witnesses to a murder, and prevent them testifying at the trial of a Millionaire Arms Dealer and being sent to prison . Then One of them, the co-owner of Hudson Air, is blown up in a plane bombing with the Dancer’s fingerprints all over it, so the FBI takes the other witnesses into protective custody.

Enter quadriplegic ex-cop Lincoln Rhyme, who can find enough forensic evidence to hang a man in the smallest debris, and Amelia Sachs his brilliant able bodied assistant assistant. Only Rhyme can decipher a crime scene, read the residue of a bombing or identify a handful of dirt well enough to keep up with the killer. Their job is to keep the remaining two witnesses safe, and to find the Coffin Dancer before he clobbers them and anyone else who tries to get in his way. So Rhyme, and Sachs, face a race against time to trace the Dancer through Manhattan streets, airports and subways leading to an exciting climax.