Arthur Peppercorn, the Cheif Mechanical Engineer for the LNER from 1946 to 1949, was born in Leominster, Herefordshire on 29 January 1889. He was educated at Hereford Cathedral School. In 1905 he started his career as an apprentice with the Great Northern Railway (GNR) at Doncaster. He succeeded Edward Thompson as CME on 1 July 1946 but his style of work was more like Thompson’s predecessor Sir Nigel Gresley. Peppercorn finished several projects which were started by Thompson, but most popular were his LNER Peppercorn Class A1 and the LNER Peppercorn Class A2.

Edward Thompson had set down a strict set of design guidelines for the incoming CME, relating directly to the upcoming design of Express Passenger Pacific Locomotive. The design was to draw heavily on the A1/1 Pacific Great Northern which had been rebuilt during Thompson’s time in office. This would have created a cross between the A2/3 Pacifics, and Great Northern’s 6’8″ driving wheels. By the time Peppercorn was in office, reports of Great Northern’s persistent frame problems, hot axleboxes, and steam leaks were all filtering back into the design office. The general belief was that the issue was being brought about because of a lack of frame support at the front end, largely due to the cylinders not being mounted aligned with each other (an aspect of divided drive combined with equal length connecting rods). Thompson’s guidelines would have produced another locomotive with the cylinders apart, so Peppercorn decided against it, and brought the cylinders in line, and arranged the locomotive as something of a merging of both Gresley’s A4 and Thompson’s A2/1, creating first the A2 class, and then the A1.

Both of the Peppercorn Pacifics utilised a boiler incorporating a 50 sq ft grate, allowing for very high power levels to be produced, but at the cost of a relatively high fuel consumption, and consequently, though both the A1 and A2 classes were regarded as excellent locomotives, they were not especially popular with those who had to fire them. The A1s were intended to take over from the A4s on non-stop express duties, but they failed to dent the monopoly of the A4s over the London-Edinburgh Expresses, which after postwar frame alignment and fitting of double Kylchap Chimneys, became the standard bearer of the East Coast Main line once more.

The real strength of the A1 and A2 classes lay in their reliability. By carefully incorporating the best of Gresley and Thompson design, as well as ideas of his own, Peppercorn had produced two masterpieces of durability and low service cost. Some five of the A1’s had roller bearings fitted throughout, and these five regularly clocked up mileages of over 150,000 between intermediate overhauls. Even the plain bearing A1’s were capable of 90,000 miles between overhaul, and no other express passenger locomotive class in the UK could better 80,000. The first of his A2 engines had single chimneys, and when fitted with a self cleaning smoke-boxes experienced steaming problems which took some time to resolve. Changing to Double Blast-pipe resolved much of the issues, though some of the A2’s retained single chimney without self cleaning apparatus. The A1’s, being built afterwards, and incorporating the lessons learned, featured the Double Blast-pipe and Chimney from new.

These were known as some of the best British steam locomotives ever in service, the A2’s were particularly powerful, and finally produced the answer to the heavy services on the Edinburgh to Aberdeen Line which had blighted both Gresley (P2 Class- too long a rigid wheelbase) and Thompson (A2/2 and A2/3- both lacking adhesion). Upon Nationalisation and the foundation of British Railways, he continued in essentially the same job, now titled “Chief Mechanical Engineer, Eastern and North Eastern Regions”; he retired at the end of 1949, two years after nationalisation. Overall he was active as a railway Chief Mechanical Engineer for three and a half years. Sadly Non of the original A1’s survived the Beeching Axe, however the A1steam Trust set about building one, which was unveiled in 2008 this has been A star at many Steam Gala’s since including the Severn Valley Railway’s Pacific Power event 2016 alongside recently rebuilt LNER A3 Pacific 4472 Flying Scotsman.

The classic poem “The Raven” by Edgar Allan Poe was published in the New York Evening Mirror, on 29 January 1845, the first publication with the name of the author, Edgar Allan Poe. The Raven tells of a talking raven’s mysterious visit to a distraught lover, who is lamenting the loss of his love, Lenore and it traces the man’s slow descent into madness, which the raven seems to further instigate with its constant repetition of the word “Nevermore”. The poem has a supernatural atmosphere and also makes use of a number of folk and classical references and became a huge success. Poe claimed to have written the poem very logically and methodically, intending to create a poem that would appeal to both critical and popular tastes, as he explained in his 1846 follow-up essay “The Philosophy of Composition”. The poem was inspired in part by a talking raven in the novel Barnaby Rudge: A Tale of the Riots of ‘Eighty by Charles Dickens. Its publication made Poe widely popular in his lifetime, although it did not bring him much financial success. Soon reprinted, parodied, and illustrated, critical opinion is divided as to the poem’s status, but it nevertheless remains one of the most famous poems ever written.

Poe also produced his own journal, The Penn (later renamed The Stylus), and is considered part of the American Romantic Movement and is remembered for his tales of mystery and the macabre, Poe was one of the earliest American practitioners of the short story and is considered the inventor of the detective fiction genre. He is further credited with contributing to the emerging genre of science fiction.and his works influenced literature in the United States and around the world, as well as in specialized fields, such as cosmology and cryptography. Poe and his work appear throughout popular culture in literature, music, films, and television. A number of his homes are dedicated museums today. The Mystery Writers of America present an annual award known as the Edgar Award for distinguished work in the mystery genre. The award is named after this author.

Tommy Ramone (Thomas Erdilyi) was born 29th January 1952. The Ramones were one of the worlds most influential Punk Rock Band, Formed in the New York City neighborhood of Forest Hills, Queens, in 1974, they are often cited as the first punk rock group, and despite achieving only limited commercial success, the band had a profound influence on the punk rock movement both in the United States and the United Kingdom. All of the band members adopted pseudonyms ending with the surname “Ramone”, though none of them were related. They performed 2,263 concerts, touring virtually nonstop for 22 years.

In 1996, after a tour with the Lollapalooza music festival, the band played a farewell concert “Adios Amigos” and disbanded. Sadly Little more than eight years after the breakup, the band’s three founding members—lead singer Joey Ramone, guitarist Johnny Ramone, had died while bassist Dee Dee Ramone sadly passed away in 2002.

The only record with enough U.S. sales to be certified gold was the compilation album Ramones Mania. However, recognition of the band’s importance built over the years, and they are now cited in many assessments of all-time great rock music, such as the Rolling Stone list of the 50 Greatest Artists of All Time and VH1′s 100 Greatest Artists of Hard Rock. In 2002, the Ramones were ranked the second-greatest band of all time by Spin magazine, trailing only The Beatles. On March 18, 2002, the Ramones—including the three founders and drummers Tommy and Marky Ramone—were inducted into the Rock and Roll Hall of Fame. In 2011, the group was awarded a Grammy Lifetime Achievement Award. 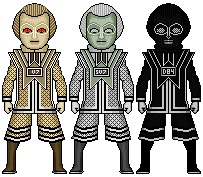 The first exciting episode of the classic Doctor Who story The Robots of Death was broadcast on 29 January 1977. It sees The Doctor (Tom Baker) and Leela (Louise Jameson) arrive on an inhospitable and Barren planet where, a huge sandminer vehicle, Storm Mine 4, is slowly scraping the surface in search of precious minerals. The sandminer is manned by a crew of nine humans led by Commander Uvanov, Dask and Poul who work alongside numerous robots – black ‘Dums’ that cannot speak, pale green ‘Vocs’, and a silver ‘Super Voc’ which controls all the ‘Dums’ and ‘Vocs’ who perform all the hazardous tasks.

However The peace is shattered when one of the crew members is found dead. Tension mounts and Accusations fly as the two new arrivals are suspected of murder and incarcerated. However the Doctor has a completely different theory and suspects something else may be happening. Then the Mineralogist is found dead, and the Driver of the Sandminer is also found strangled. Then the controls of the Sandminer are sabotaged and it starts running out of control endangering everyone onboard.

The Doctor eventually convinces The crew that he is not responsible for the murders, and they ask Him for help, so he suggests that the robots are responsible and that somebody may be reprogramming the Robots to clobber people. However the disbelieving crew reject the idea citing Asimov’s first Law of Robotics which states that “No robot shall kill a human being”. So the Doctor suggests they may be malfunctioning and agrees to help before more rogue robots start running amok clobbering people. He then discovers that One of the robots, D84. and Poul are in fact undercover agents for the mining company, who were placed on board the miner as a precaution after learning of threats of a robot revolution by a Mad scientist called Taren Capel. Capel was raised by robots and dislikes the way Robots are treated as slaves so he decides to end Robot servitude and maltreatment at the hands of human beings and free them, so they can rule the world.