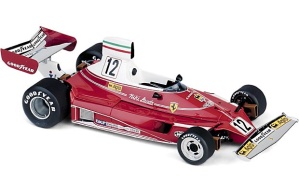 Formula One legend Niki Lauda was born on 22 February 1949 in Vienna, Austria, His paternal grandfather was the Viennese-born businessman Hans Lauda. Lauda became a racing driver despite his family’s disapproval. After starting out with a Mini, Lauda moved on into Formula Vee, but rapidly moved up to drive in private Porsche and Chevron sports cars. Then he got into the fledgling March team as a Formula Two (F2) driver in 1971. He was quickly promoted to the F1 team, but drove for March in F1 and F2 in 1972. Although the F2 cars were good March’s 1972 F1 season was catastrophic so Lauda, joined the BRM team in 1973. Lauda was instantly quick. However his big break came when his BRM teammate Clay Regazzoni left to rejoin Ferrari in 1974 and team owner Enzo Ferrari asked Regazzoni to suggest a replacement and he recommended Lauda.

During the 1970s, Ferrari s fortunes revived under Luca di Montezemolo and Lauda finished second-place at the 1970 Argentine Grand Prix and won the Spanish Grand Prix after achieving six consecutive pole positions however, a mixture of inexperience and mechanical unreliability meant Lauda won only one more race that year, the Dutch GP. He finished fourth in the Drivers’ Championship.The 1975 F1 season started slowly for Lauda, not finishing higher than fifth in the first four races but he then won four out of the next five races in the new Ferrari 312T. His first World Championship was confirmed with a third place finish at the Italian Grand Prix at Monza; Lauda’s teammate Regazzoni won the race and Ferrari clinched their first constructor’s championship. Lauda won the race of the year, the United States GP. He also became the first driver to lap the Nürburgring Nordschleife in under 7 minutes. Never one to be awed by the trappings of success, Lauda famously gave away any trophies he won to his local garage in exchange for his car to be washed and serviced. despite tensions between Lauda and di Montezemolo’s successor, Daniele Audetto, Lauda dominated the start of the 1976 F1 season, winning four of the first six races and finishing second in the other two. By the time of his fifth win of the year at the British GP, he had more than double the points of his closest challengers Jody Scheckter and James Hunt, and a second consecutive World Championship appeared a formality. It would be a feat not achieved since Jack Brabham’s victories in 1959 and 1960. He also looked set to win the most races in a season, a record held by the late Jim Clark since 1963.

A week before the 1976 German Grand Prix at the Nürburgring, Lauda urged his fellow drivers to boycott the race, largely due to the 23 kilometre circuit’s safety arrangements. Most of the other drivers voted against the boycott and the race went ahead. On 1 August 1976 during the second lap at the very fast left kink before Bergwerk, Lauda’s Ferrari swerved off the track, hit an embankment, burst into flames and rolled back into the path of Brett Lunger’s Surtees-Ford car. Unlike Lunger, Lauda was trapped in the wreckage. Drivers Arturo Merzario, Lunger, Guy Edwards and Harald Ertl arrived at the scene a few moments later, but before they were able to pull Lauda from his car, he suffered severe burns to his head and inhaled hot toxic gases that damaged his lungs and blood. As Lauda was wearing a modified helmet, the foam had compressed and it slid off his head after the accident, leaving his face exposed to the fire. Although Lauda was conscious and able to stand immediately after the accident, he later lapsed into a coma. Lauda suffered extensive scarring from the burns to his head, losing most of his right ear as well as the hair on the right side of his head, his eyebrows and his eyelids. He chose to limit reconstructive surgery to replacing the eyelids and getting them to work properly. Since the accident he has always worn a cap to cover the scars on his head.

Lauda was replaced by Carlos Reutemann and Ferrari boycotted the Austrian GP in protest against McLaren driver James Hunt at the Spanish and British GPs. Surprisingly, Lauda returned to race only six weeks (two races) later, at Monza and finished fourth in the Italian GP where he wore a specially adapted AGV crash helmet so as to not be in too much discomfort. In Lauda’s absence, Hunt had reduced Lauda’s lead in the World Championship standings and stood three points behind Lauda before the final race of the season, the Japanese GP. Lauda qualified third, one place behind Hunt, but retired after two laps. Hunt led much of the race before his tires blistered and an inevitable pit stop dropped him down the order. He recovered to 3rd, and won the title by a single point. Niki Lauda’s incredible rivalry with James Hunt is also the subject of the film Rush starring Chris Hemsworth. Lauda had a difficult 1977 season, despite winning the championship. Lauda disliked his new teammate, Reutemann, and felt he had been let down by Ferrari so he announced his decision to quit Ferrari at season’s end, Lauda left earlier due to the team’s decision to run the unknown Gilles Villeneuve in a third car at the Canadian Grand Prix. Five years after his first retirement, Lauda won his third title driving a McLaren MP4/2. having joined Brabham in 1978 for a $1 million salary, Lauda endured two unsuccessful seasons, notable mainly for his one race in the Brabham BT46B, a radical design known as the Fan Car: it won its first and only race at the Swedish GP, but Brabham did not use the car in F1 again; after other teams vigorously protested the fan car’s legality. Lauda next drove the Brabham BT46 Alfa Romeo which began the 1978 season at the third race in South Africa. The BT46 suffered from a variety of mostly minor troubles that forced Lauda to retire the car 9 out of 14 races. However, when it ran it ran well, with Lauda winning the sole outing of the fan car in Sweden, and also winning in Italy, as well as 2nd in Montreal and Great Britain, and a 3rd in the Netherlands. At the 1979 Canadian Grand Prix, Lauda informed Brabham that he wished to retire immediately, as he had no more desire to “drive around in circles”. Lauda, who had founded a charter airline, returned to Austria to run the company full-time.

In 1982 Lauda returned to racing, feeling that he still had a career in Formula One. After a successful test with McLaren, the only problem was in convincing then team sponsor Marlboro that he was still capable of winning. Lauda won the Long Beach Grand Prix. Before the race at the Kyalami race track in South Africa, Lauda organised a ‘drivers’ strike over the new contracts, and The drivers, with the exception of Teo Fabi, barricaded themselves in a banqueting suite at Sunnyside Park Hotel until they won. Lauda won a third world championship in 1984 by half a point over teammate Alain Prost, due only to half points being awarded for the shortened 1984 Monaco Grand Prix. he also won the Austrian Grand Prix. Initially, Lauda did not want Prost to become his teammate, as he presented a much faster rival. However, during the two seasons together, they had a good relationship. The whole season continued to be dominated by Lauda and Prost, who won 12 of 16 races. Lauda won five races, while Prost was able to win seven Grands Prix. However, Lauda, who was able to set records for most Pole Position in a season during the 1975 season, rarely matched his teammate in qualifying. Despite this, Lauda’s championship win came in Estoril, when he had to start in eleventh place on the grid, while Prost qualified on the front row. However, Lauda was able to come in second and claimed the title. 1985 was a poor season for Lauda, with eleven retirements from the fourteen races he started. He did not start the Belgian Grand Prix at Spa-Francorchamps after crashing and breaking his wrist during practice, and he later missed the European Grand Prix at Brands Hatch. He did manage 4th at the San Marino Grand Prix, 5th at the German Grand Prix, and a single race win at the Dutch Grand Prix. This proved to be his last Grand Prix victory and also the last Formula One Grand Prix held in the Netherlands. He retired for good at the end of that season.